On October 22nd we participated in the NF Walk in Los Angeles at the CBS Studio Center back lot. It was the 11th walk in LA and our fourth. This time it was a night walk with a glow-in-the-dark party. What an awesome event.

We had been working hard on making the carnival area even cooler this year with glowing games and prizes.

There were many other celebrities from Ignacio Serricchio (Bones), Nadia Bjorlin (Days of our Lives), Josh Kelly (One Life to Live), Robert Romanus (Fast Times at Ridgemont High), Brendan Robinson (Pretty Little Liars) and so many more.

Even the host of the walk, and longtime Children's Tumor Foundation supporter, Jonathan Sadowski (Young & Hungry) sang. He found a new friend in our new NF mascot Thor!

As it was a glow party, the boys just couldn't help themselves with creating a glow in the dark costume. Tyson one best costume of the night with his alien in a UFO!!!

Ryder was a robot. He found a group of lights along the walk route that needed another point to make a snowflake. He used his lit up cane to finish the snowflake.

This was a great event that raised over $150,000 for the Children's Tumor Foundation and had over 550 paricipants. 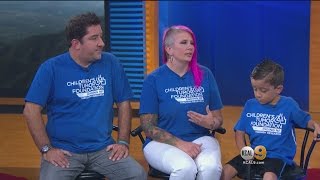 Give Kids The World Reunion at Knotts